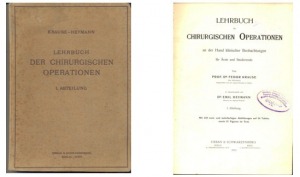 The idea for writing the monograph came from the General Director of the Clinical Center, Mirko Stanetić, PhD, in December 2009. The period from idea to realization meant the series of procedures that should be respected when entering into such a project, and for that purpose was named a holder of the work on the monograph, it was prepared a plan of the Research Project (a collection of archival and documentary materials) and appointed a professional team that will work on the monograph.

The holder of the work on the book is a librarian of the Clinical Center, professor Jadranka Senić.

The research project started in May 2010. Eighty percent of the project is completed and the completion is expected by the end of February 2011. With the previous research, among other things, there are some information on the organizational structure of the Hospital in Banja Luka, that had different names in different periods of time: the state hospital, city hospital, district hospital, general hospital and then the Medical Center, Regional Medical Center, Clinical – Hospital Center and the Clinical Center.

The managers of the hospital before World War II were the doctors: Mujezinović and Muškatirović and later: Stopa, Davidović, Vindakijević, Fajfer, Žnidaršić, Mikeš, and the directors were: Kapetanović, Milošević, and others. On the basis of the archival and documentary materials that we have found, it can be followed the work of all departments – services – clinics in different time of periods. It can be also monitored the construction phase of the Medical center and its equipment.

The expert team for a monograph consists of internal and external collaborators.

In addition to naming the holders of the work, the research project and co-workers, the work on a monograph required finding and equipping the premises for the staff, assigning the administrative worker, naming the editorial board for a monograph, naming the selection committee of the received archival and documentary materials, writing the instructions for the contribution concept, instructions for making the final text of articles, as well as the drafts of the monograph, arranging the Archive of the Clinical Center, after which was established an archival book that is the basic document of each archive. It is regulated the way of using archival records of the Clinical Center.

As for the archive and documentary material obtained during the investigation, it was successively collected even after selection, which requires a lot of time, copied, marked and sent to contributors. All submitted material is duly recorded in the records of the staff and its deliver was followed through the contact with the co-workers. It is also collected and scanned a certain number of photos, which is important for a monograph.

The associates still collect the materials and design their contributions. Some of them have completed that. Among them are Dr. Ilija Zubović and Dr. Borjana Vujošević.

There is no doubt that there was a need to write about work and development of our institution and to present that in the public and the role and place of health care system for the population of this region, based on humanistic principles. The period from hospital to the clinical center was long, not easy and simple, and it included three centuries. Regardless of that, there had grown prominent predecessors and today’s professionals with a vision for health. It happened sometimes that free rooms or equipment was missing, sometimes even the staff was missing, but there was never a lack of enthusiasm and a firm belief that a useful and responsible task is performed, taking into account the dignity of the profession, but also a dignity of a patient.

To write and make it into a harmonious book, people, events and time that marked a health care institution, was not simple at all. But if it’s not written, it may be the worst – as if it never existed, no matter for how long it lived in memory. This is an obligation to those who created it, who, as its members, lost their lives in the wars in this region, where patient always come on the first place. In order to fulfill this obligation, it is needed, in addition to logistics, expertise and creativity, much love and conviction that it is written for generations.

These lines should be a call to the stuff at the Clinical Center and to the citizens of Banja Luka, the present citizens, as well as those who used to live in it, to contribute in the preparation of the monograph, in a way they can do it- with their photographs, their personal archive and so on. Everything is welcomed.

Procedure for submission of application to Ethics Committee of Clinical Center

The rules in the hospital

Adequate access to communication for patients suffering from malignant diseases

Procedure in case of death of patient

Code of ethics of nurses and technicians